Stocks Farm, a 200 acre, family-run business in Suckley, Worcestershire, is a modern day success story grown from the time-honoured British tradition of hop farming.   The farm produces enough hops to brew about 46 million pints of beer. 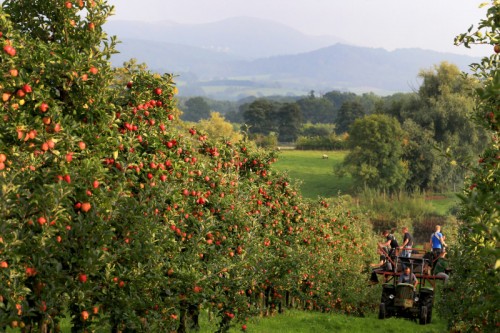 One of Britain’s top hop producers, the farm benefits from the English maritime climate which results in a unique ’terroir’ – the combination of climate and soil.  While these mild, damp and moist conditions don’t necessarily make for a balmy summer, they have helped to make Britain famous for the most balanced and drinkable beer in the world.

British hop aromas are delicate and complex, giving the beer a particular intensity of flavour.  This has led British hop growing to be revered across the globe.  Ali Capper, whose family has managed Stocks Farm for over 50 years comments, “Like many horticulturists, the life of a hop grower is at the mercy of the English weather. Luckily for us, in a good year the maritime climate is to our great advantage enabling us to produce a crop with a uniquely complex flavour base with a fantastic end product – beer, our national drink.”

“At Stocks Farm, we produce nine different hop varieties. Heritage varieties such as Fuggles, (minty and floral characteristics) and Goldings (earthy and spicy notes) form the bedrock of this country’s brewing.  In addition, we are always open to trialing new varieties and work closely with the British Hop Association and Wye Hops to identify new hop varieties with potential for the future.”

Hop growing has been integral to British life since the early 19th century, when families would travel from industrial towns around the UK to help harvest the 77,000 acres of hops.  While there has been a gradual decline in production since then, in the past few years there has been a revival, partly down to the demand for more local and unique products such as micro-brewed beers.

And, what of the future?  Ali Capper feels that there is a great opportunity for hop growers to capitalise on the industry’s reputation. She explains, “The potential for a renaissance in hop growing lies in exports and in that area we have all the credentials to resume our rightful place as a leader in the field. The delicate complexities and diverse aromas that can be produced here, compared with the higher notes of warmer climes, mean that we can fill a gap in other countries’  beer portfolios.”

Dr Peter Darby, British Hops Association, comments, “The flavour of English hops is like a chamber orchestra simultaneously giving a rich ensemble of high and bass notes. With over twenty commercially available varieties and more in the pipeline, brewers around the world who want to try something new and different can experiment with our great British hops.  We are proud that the heritage and quintessential character of the English countryside is reflected in our hop varieties.”